The Board of Directors contracted Lake Management Services to perform a fish survey this year.  Click here to view their report.  The Board will be hosting a re-stocking community event as soon as the larger fish become available from the supplier. 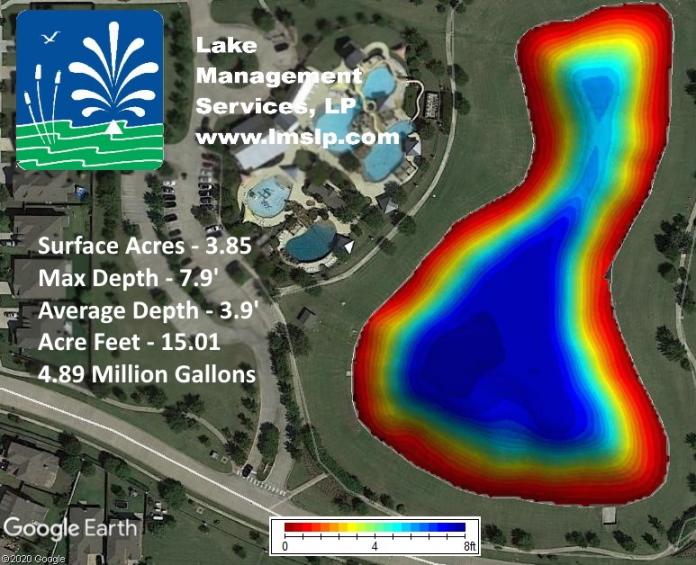 Company that maintains the pond

Urban Fisheries
by Mac McCune
Urban lakes and ponds are usually designed for flood control, aesthetics, a source for irrigation water and recreation. Recreation is typically limited to fishing from shore only and few communities allow boating. Fishing is typically a low priority, catch and release only and the main objective is to make sure that the fish are healthy through aquatic habitat management. This includes water quality and aquatic vegetation control.
Stocking gamefish, such as largemouth bass, bluegill and redear sunfish, fathead minnows, channel catfish, etc. is usually done by professional fish farms to insure the quality of fish. Unfortunately, from time to time, residents may use the lake or pond as a final release for aquarium or back yard water garden species that become overabundant or too large. This should not be done as different species can carry various forms of disease, parasites, etc. The unauthorized release of live fish could also impact the balance of the fishery and disrupt the entire aquatic eco-system. For example, what may appear to be a harmless catfish to someone could actually be a bulhead catfish. These species are notorious for overpopulating, scavenging on the bottom disrupting bottom sediments resulting in muddy water. This, in turn, reduces sunlight penetration needed by aquatic plants for photosynthesis so few plants survive. Without aquatic plants, dissolved oxygen levels may decline which can result in suffocation of the fish.
Conversely, the introduction of “pretty” aquatic plants can also be extremely detrimental and end up costing the association a lot of money through control once they overpopulate. In fact, there are several species of aquatic plants that can double in abundance every week or two.

Habitat, to provide cover and protection, is critical to the success of the fishery. Otherwise,predator species tend to wipe out their prey resulting in minimal food supplies which, in turn, affects both reproduction and growth rates. The introduction of tree stumps, logs, brush piles, Christmas trees, concrete blocks, old culvert pipe, etc. can provide prey species with cover and protection.
The bottom line is that to help insure that your lake or pond remains as healthy as possible and that the ecosystem remains balanced, residents should absolutely refrain from introducing any live animal, such as a pet turtle or waterfowl, any fish and any plants no matter how innocent they seem to be.
1650 Hwy. 6 South, Ste. 430, Sugar Land, TX 77478, (281)240-6444 ofc, (281)240-2919 fx,
www.lmslp.com

At times our wet retention pond has an abundance of algae floating on the surface of the water.  When this occurs our pond maintenance company will treat the algae with a product to cause it to die and turn a brown color and the algae looks like dead grass floating on the surface of the wet retention pond.  If the algae doesn’t decompose fast enough they follow up with a muck reduction product to expedite the decomposing process.

We have been presented with comments regarding the benefits of algae to the fish since algae produces oxygen.  We asked our pond maintenance company this question and following is their response.

“Algae is both aerobic AND anaerobic. In sunlight, it does produce oxygen just like any other plant. Unfortunately, in cloudy conditions and at night, it consumes oxygen and produces other harmful gasses. Also, once algae reaches the end of it’s life cycle, the decomposition process also consumes oxygen. Fish can sustain with some small amount of aquatic weeds, which is part of our plan when managing an aquatic ecosystem. We maintain some plant life that is either not noticeable, or only grows a few inches from the lake floor. Fish can live, feed and nest in these areas, however this plant life never reaches the surface of the water.”

Having an aquatic ecosystem in the midst of a residential community presents us with the challenge of needing to keep the pond looking attractive for our homeowners that prioritize the aesthetics of the wet retention pond while also maintaining the well being of of the fish that need a healthy ecosystem to survive.  Our pond maintenance team works hard to ensure that both priorities are met.
June 2016
Dear Residents:
It has been brought to the attention of the Advisory Committee and Assured Management that homeowners are dumping minnows and fish into the HOA Common detention pond. While we appreciate the effort and concern, please note this is not permitted. The detention pond is maintained by a professional Lake Management Company and they are the only ones authorized to add fish, chemicals or anything else the pond may need. The pond is stocked and maintained in accordance to its size. Adding more fish could cause an over-population and have a negative impact on the existing fish.
Please note that bringing in fish that have been caught in other lakes or ponds could transport disease and bacteria into the HOA detention pond which could be detrimental to the marine life. This could also be classified as illegal dumping if done without HOA approval from the Advisory Committee and Board of Directors.
Below is some information from the lake management company with regard to the pond and there is also an article with regard to urban fisheries provided by the lake maintenance contractor that has been posted to the HOA website at www.thereserveatwrhoa.com.

Our pond is stocked with:
• Minnows
• Catfish
• Bluegill
• Bass
• Grass Carp
• Bass
Our pond is not designed to sustain a population of large bass. Bass need to stay under 5 lbs.

Reasons we may see dead fish:
• It is normal to see a few dead fish each week. The amount we loose on our property is a normal amount especially after the mating season.
• Bass trying to eat bluegill that are too big.
• Blue Heron trying to catch fish, the fish are hurt and die later.
• Improper Catch & Release
• Pulling the hook out of the stomach which rips the fish insides.
• Hooking fingers into their gills damages them.
• Grabbing large fish under the lower jaw (this procedure should only be done with small fish).
Our pond maintenance team performs the following checks:
Monthly
• Water quality testing to measure the health of the wet detention pond.
• Chemicals tested include
• pH
• Total Alkalinity
• Dissolved Oxygen
• Carbon Dioxide
• Copper
• Orthophosphates
• Ammonia Nitrogen
• Total Hardness
• Water Temperature
• Clarity
• Determine amounts of weeds and algae and treat accordingly. The chemicals they use do
not harm the wildlife. We adhere to the laws that govern what amounts can be used by
size of water.
Bimonthly
• Aquatic Vegetation Control
• Watershed conditions as well as erosion and sedimentation
Possible chlorine runoff
The city of McKinney approved the design plan for the way splash off water runs from our pool deck into our pond. Any chlorine that is picked up from this area and runs into our pond has never been enough to register outside the normal range. To date we have never seen a spike in chlorine in our pond.
Possible fertilizer runoff
This is not harmful to any wildlife in the water. If our pond maintenance team were to notice
anything outside of the normal range they would notify us and offer a solution.
Thank you,
The Reserve at Westridge Advisory Committee
Assured Association Management, Inc.

Just watching ducks in a pond can be good for you, thanks to benefits of biophilia like reduced anxiety and increased creativity. Lots of people try to return the favor by tossing food to waterfowl, typically bread. In England and Wales alone, park visitors feed wild ducks an estimated 6 million loaves of bread every year. Yet despite the ducks’ gusto, bread is mostly bad for them. It can lead to health woes like obesity, malnutrition and possibly a crippling condition
known as “angel wing.” Too much free food of any kind may also endanger ducklings just by teaching them to beg rather than forage. Even the bread they don’t eat can hurt local water quality.
1. Bread is crummy for birds’ health.
Ducks’ natural foods vary by species, but most have a pretty diverse diet. Mallards, for example, eat a mix of plants and seeds as well as insects, worms, snails and crustaceans. Bread may offer calories, but it has few of the nutrients ducks can get from their environment. And once you’re full of bread, who wants to forage?
2. Free food isn’t all it’s quacked up to be.
In addition to the nutritional issues posed by abundant bread, too many handouts of any kind raise a wide range of problems for waterfowl. These include:
•  Overcrowding: Ducks and geese naturally find habitats that offer enough food, but handouts can lure large crowds to areas that wouldn’t normally support them. Natural foods are also widely scattered, letting birds eat in relative privacy, while competition is often fierce and stressful at artificial feeding sites.
•  Disease: Too many birds means too many droppings. That’s a health risk, both in water and on land. Plus, as the New York Department of Environmental Conservation points out, “diseases generally not transmissible in a wild setting find overcrowded and unsanitary conditions very favorable.”
•  Delayed migration: Artificial feeding has been known to shorten or even eliminate migration patterns of waterfowl. They may be reluctant to leave a reliable food source despite the onset of winter, and then struggle to survive as temperatur
es fall—especially if the cold discourages their human feeders.
•  Expectations: Our gifts may also spur a few other negative changes in birds’ behavior.  When adult ducks become obsessed with free bread, for example, they may fail to give their ducklings a sufficient education in foraging, thus committing them to a life as beggars. Once birds are dependent on handouts, they tend to lose their fear of humans
and behave more aggressively.

3. The leftovers have a ripple effect.
Some of the bread we toss to waterfowl inevitably escapes their grasp. If enough calorie-rich foods accumulate in a pond, they—along with all those extra duck droppings—can trigger algae blooms that deplete oxygen from the water. Known as hypoxia, this can wipe out pond life and rob birds of natural food supplies. On land, any moldy leftovers lying around could be particularly dangerous if ducks eat them. This is also a risk when people feed ducks bread that has already spoiled, and as biologist Steve Carr recently told CBC News, it’s potentially fatal. “[W]hen it goes bad, it has that little green mould in it, and that mould actually causes specific diseases in ducks,” says Carr, a professor at Canada’s Memorial University. “It causes lung diseases, so it’s not just nutritionally bad — it can just kill them outright.”
None of this means it's necessarily wrong to feed waterfowl. The main lesson bird experts and wildlife advocates want to convey is moderation, which means limiting the size of handouts as well as avoiding ponds where lots of other people already toss food. A little bread might even be OK now and then, although several other human foods come closer to providing the right mix of energy and nutrients.
Many conservation groups discourage feeding wildlife at all, and for good reason. But some also offer lists of alternative snacks that are less harmful to ducks and geese, hoping to at least improve the food if they can't prevent the practice entirely.

So, if you still feel compelled to feed your local ducks, try these instead of bread:
• Corn (canned, frozen or fresh)
• Duck pellets (sold online and at pet stores)
• Lettuce, other greens (torn into small pieces)
• Frozen peas (defrosted)
• Oats (rolled or instant)
• Seeds (including birdseed or other varieties)
http://www.mnn.com/earth-matters/animals/blogs/why-you-shouldnt-feed-ducks-bread